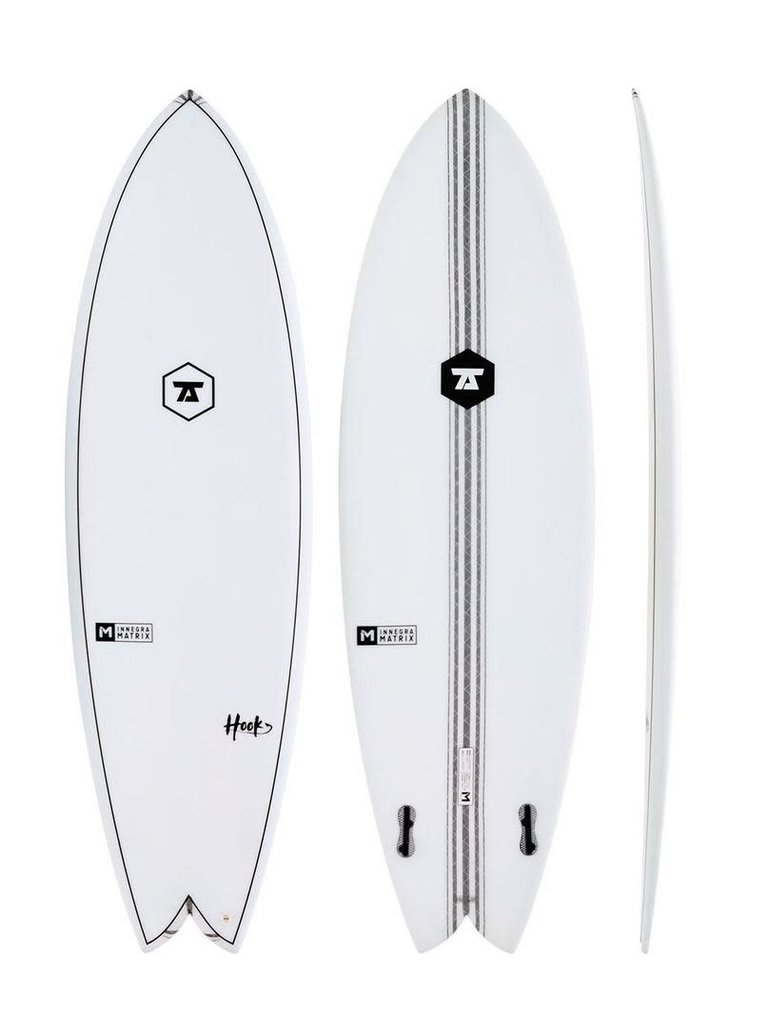 The Hook merges some old and new surfboard design characteristics to offer a fast, yet highly functioning hybrid twin fin surfboard that will unlock a whole new approach to your surfing. This twin offers the confidence to turn without having to compromise power. OUTLINE: We’ve put a modern twist on the traditional fish outline. It’s still relatively full upfront, but it narrows considerably through the tail. This promotes an easier rail-to-rail transition and allows the rail to engage and bite into the wave face when turning with more force. ROCKER: Considered medium-to-low, which has its advantages when generating speed and acceleration in softer conditions, however, there’s enough curve to surf closer towards the pocket and still confidently draw a longer line on more open face waves. CONTOURS: Featuring the signature 7S step-deck to ensure maximum buoyancy under the chest while maintaining a lower rail for sensitivity. Forward vee displaces water efficiently from the wider nose and helps eliminate any sticking feeling when driving down-the-line. Vee transitions into a single/double concave combo through the back offering a nice feeling of sensitivity and liveliness when making more critical turns. FINS: Fin placement is a key ingredient with this board. They’re positioned further back compared to most twin models on the market. This eliminates any sketchy feeling when driving through a bottom turn, improves overall backhand performance, and adds control so the board can be surfed in bigger waves. Fin Recommendations:FCS II Modern Keel – Controlled feel. FCS II Power Twin – Looser feel. PERFORMANCE: Like with most twin models, the first thing you’ll notice is the speed and the freedom in which it turns and pivots. But, what separates the Hook is that it offers an underlying feeling of security and poise when loading up the fins, i.e. It won’t feel like it’s going to skip out. This is not just a small wave board, it can be surfed confidently in overhead waves. It’s hard to go back to three fins once you ride the Hook!